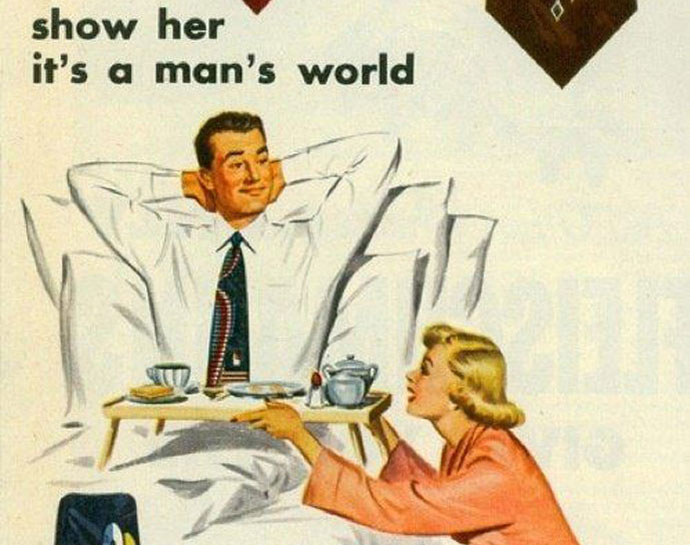 In an ever-changing world where stability is practically nonexistent,  one phenomenon that has managed to stay afloat and withstand the test of time is the battle of the sexes. With such a prevalent predicament comes a bunch of sub-issues like gender roles and a social hierarchy.
In a domestic household,  what is the role of each spouse?  Who is the superior among the pair?  What is the perfect partner?
Ira Levin’s novel ‘The Stepford Wives‘ manages to tackle these points in a new and relatively impactful light. 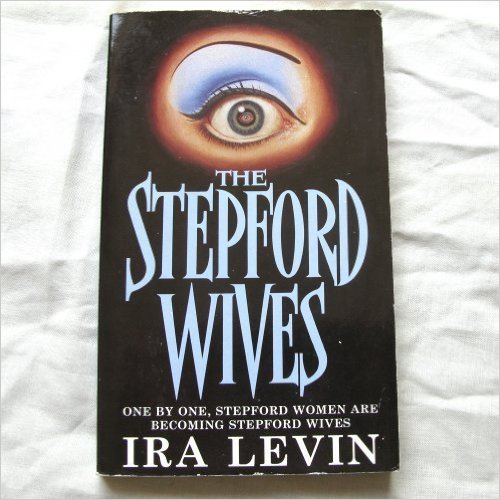 This book was turned into a movie in 1975,  two years after the book’s publication,  and was later remade in 2004. These adaptations,  though developed from the same source material,  have virtually nothing in common. One is a satirical comedy, while the other is a gritty horror film.
Let’s take a look at the different interpretations of The Stepford Wives. 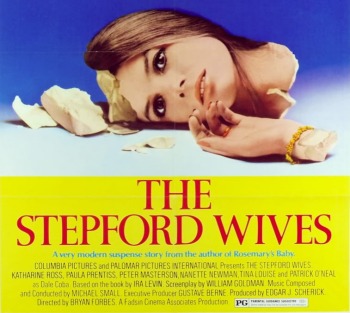 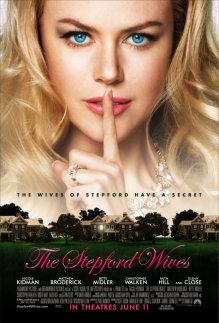 A couple having marital problems moves to a new town with their children in hopes of a fresh start. Upon arrival,  our main character, Johanna,  senses something fishy about this otherwise Utopian dwelling. After a lot of suspicion and investigation,  we are made aware of the cringe-worthy truth behind the Stepford wives.
While the bottom line remains the same in both incarnations,  the two movies have a very distinctive way of going about it. Let’s take a closer look.
Let’s start with character and relationships.
Johanna is the protagonist of these films. She moves the plot forward an she is our eyes and ears.
In the 1975 version, Johanna is played by Katharine Ross. 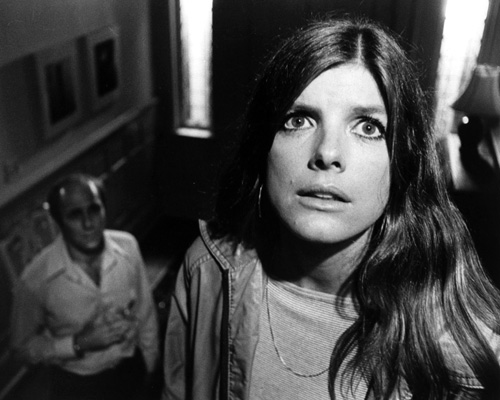 She’s patient and compassionate,  outspoken and truthful. You can name more than one adjective about her. However,  that’s not the case in the 2004 version. Sure,  you know more about Nicole Kidman’s Johanna , but there’s no consistency in her personality.  In the beginning of the film,  She’s a neurotic workaholic with a type A personality. 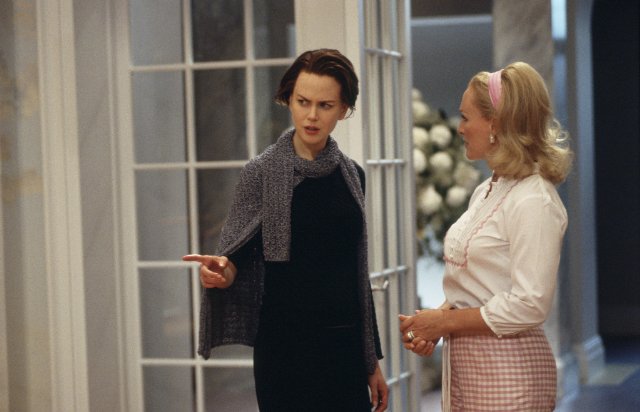 But as the movie progresses,  She’s a calm and collected housewife.

I would’ve been fine with that had the metamorphosis been a gradual occurrence,  but it literally happened over night.

Then there’s bobby. She was a really fun character in both adaptations. 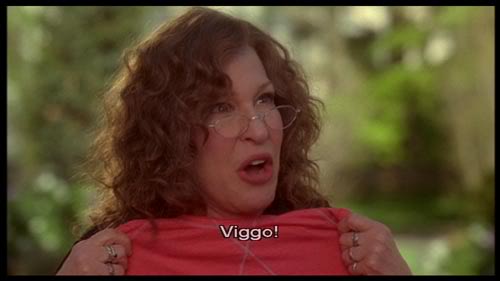 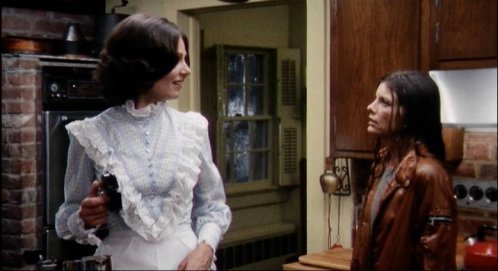 She was upbeat,  bubbly,  and most importantly,  blunt but not brazen (because a lot of people cannot distinguish one from the other).

Walter is a key component in the story. He’s Johanna Eberhart’s husband who condones her transformation by the end of the movie. In the 1975 version,  he’s played by Peter Masterson who’s able to portray a dissatisfied spouse  with a systematic approach to everything. 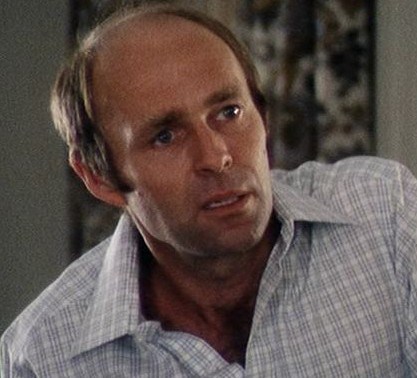 In the 2004 version however,  he’s played by Matthew Broderick,  a whiny little tool with the personality of a stale wafer. 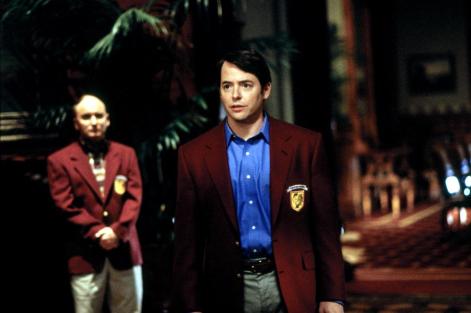 Who thought this was a good idea?  Matthew Broderick is about as interesting as scotch tape with underacting that can make Kristen Stewart blush. Nothing he says is ever relevant and his relationship with Johanna is about as believable as a diet pill.
This brings me to the main problem of the 2004 version,  the relationships among the characters. Don’t get me wrong,  the friendship of Johanna,  Bobby, and Roger (who’s played by a woman in the 1975 version) is roughly acceptable. But the coupling of the partners is just ridiculous. Not only is there an absence of chemistry,  but there’s no relationship to begin with. Whereas in the 1975 version,  there is a justification for an unrealistic pairing. For instance,  one woman got married out of desperation and a need for financial stability. In the 2004 iteration, the characters are married simply because the script says so.
Despite the fact that there is no one antagonist in this picture,  there IS a leader of sorts who’s pulling the strings of this charade. In the 1975 Stepford Wives,  this is given to a character named dis (short for Disney because he worked as an animator there) played by the chilling George Coe. 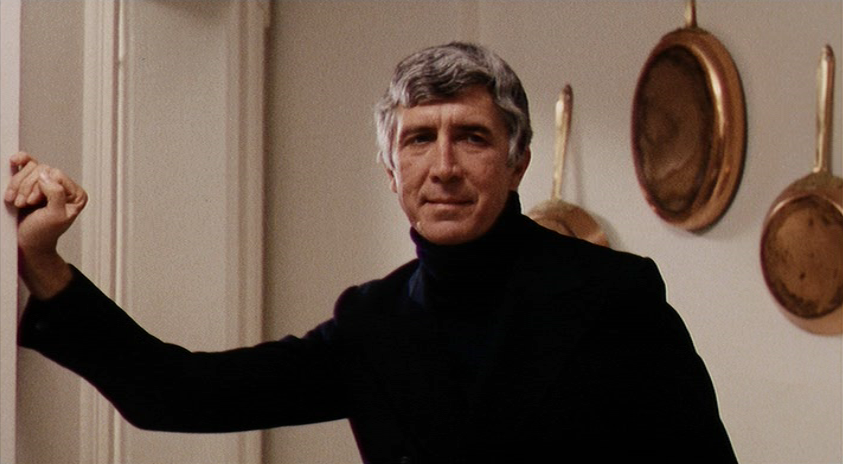 He’s an austere militant set out to create the perfect housewives for the residents of Stepford. While in the 2004 rendition,  there is no ‘dis’. There’s a mic (short for Microsoft ) played by Christopher Walken. He has a similar agenda but with a slight twist. He himself is a ‘stepford creation’ put together by his manic wife (played by the brilliant Glenn close). 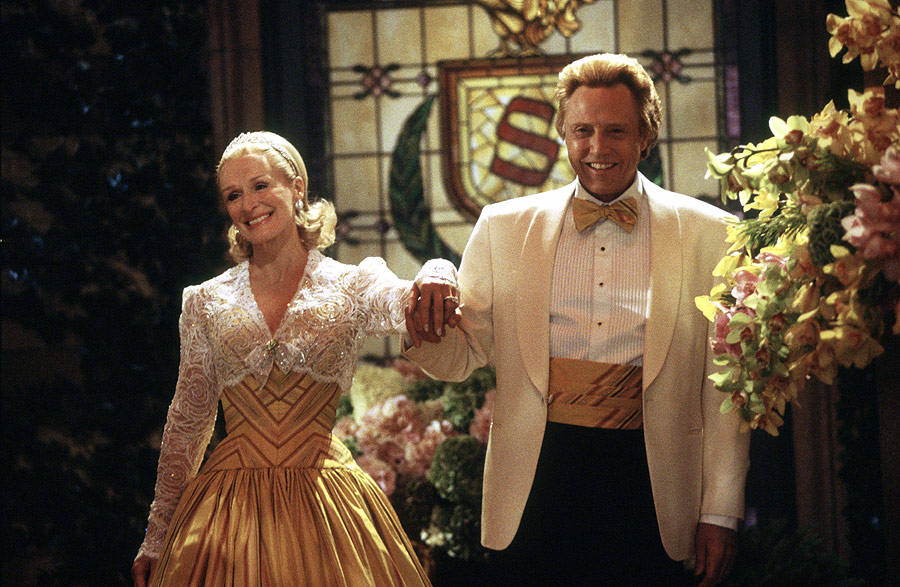 So basically,  she’s the one calling the shots. While dis is a stern dictator of sorts,  Claire is a basket case with the heart of a poet and the mind of a madman. Both are crazy,  in their own regards,  but one is more hysterical and off the rails. 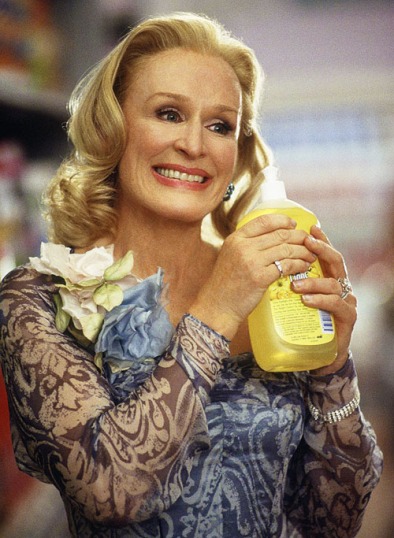 A very central plot point in the book is the transformation process. That is to say, the course of action through which the ‘stepford wives’ are created. Choosing a superior in this category was a no-brainer. The 1975 version undoubtedly takes the cake on this one. In said version,  the procedure has been perfected to a science. Whenever a new family moves in, the husband is recruited at an early stage by the men’s association. The couple is subjected to scrutiny for four months to make sure that they’re stepford material. After they’re confirmed to have ‘what it takes’,  the wife is handed a list of words that she is asked to record for a supposed speech impediment study. On the night of the transformation,  her kids are taken to a friend’s house and said wife is murdered only to be replaced by a robot that is the glamorized version of her. 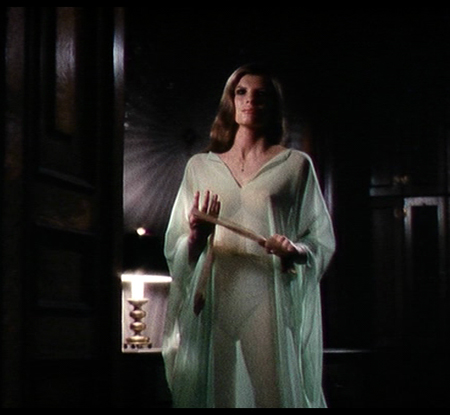 This piece of machinary can only speak within the list of vocabulary that she previously recorded.
This approach works for many reasons. First of all,  the technicalities are straightforward and direct,  nothing is left ambiguous or unexplored. You know how these ‘wives’ are created and you buy into it. In addition to that, there is no exposition. No one tells you what is going on,  you put the pieces together as the character discovers new clues. That’s treating your audience with maturity. This movie’s counterpart,  on the other hand,  fails so miserably in this department handing you scientific mumbo jumbo that doesn’t really add up. In a montage clip that Mic shows Johanna on the night of her transformation, 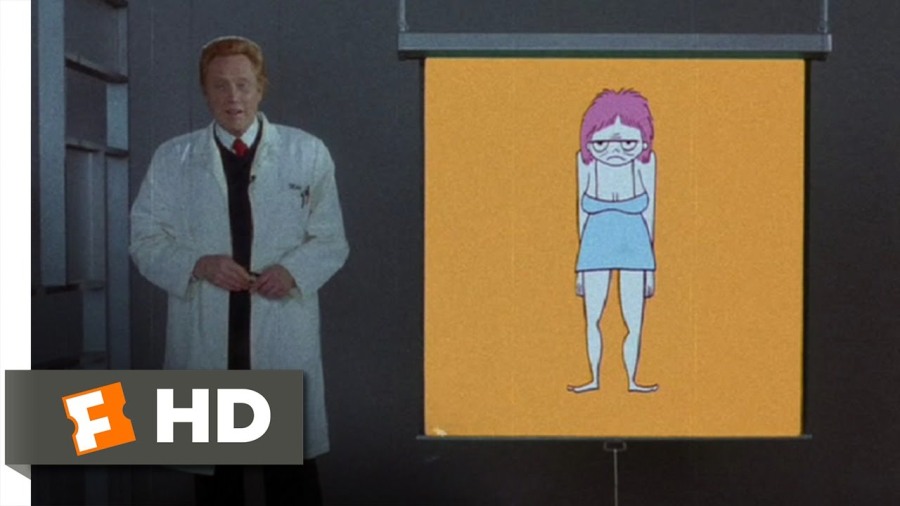 it is revealed that these housewives are created by installing microchips into their brains. By adding a prosthetic personality and mindset,  these women don’t cease being human (at least,  physically). How can they be classified as robots when they still possess their human bodies?  Now you may argue that the term ‘robot’ in this movie is used in a figurative sense. The reason why that’s not the case is because there’s a scene where Bobby places her hand on the open lit flame of the stove and fails to react. Why this works in the 1975 version is because she is a legitimate droid,  so it makes sense that her physical packaging is practically indestructible. Speaking of droids,  can we talk about these women for a split second?  In the 1975 version,  they talk and act like real human beings (sure,  a wildly unrealistic version,  but human nevertheless). While in the 2004 film,  they behave like the cheap animatronics at Chuck-E-cheese’s. It’s ridiculously over-the-top and off-putting.
1975– 1   2004-1

When you leave the theatre,  the aspect that will resonate the most is the conclusion,  the final note you’re provided. Thus,  this is a very definitive section of a film.
So who did the ending better?
Belonging to two very dissimilar genres,  each adaptation  takes a very different turn. The 1975 version ends on a very eerie note. Johanna is seen walking the supermarket isles in her robotic form

and we catch a glimpse of the new couple bickering which leads us believe that they’re the next victims of the stepford method. And then there’s the 2004 ending…
OH MAH GOODNESS.  The third act was so scattered and devoid of direction,  it was almost comical. So basically,  Walter has a change of heart and doesn’t allow Johanna to become an AI. All the other housewives’ programming is reversed and they get back at their husbands by making them do some housework. A last minute lesson is tossed at you and the movie  wraps up.
There is so much wrong, I don’t know where to begin.
Ok first of all, Roger is a man,  so why wasn’t he allowed in the men’s association?

It’s obviously not because he’s gay because his partner has the same sexual orientation,  yet he’s a member. Are we to believe that he didn’t want to participate in the club’s activities?  That’s not likely,  for he shows interest in the men’s endeavors throughout the film.
Also, Why does Claire,  being the mastermind behind this facade,  allow new residents to join the Stepford community?  The more people are involved in this venture,  the more likely it is that their secret is revealed. Also,  how many people was she to turn into robots until she feels that her ‘perfect world’ is complete?  Is there a specific number in her head that is sufficient for her little game of dollhouse? And if this quaint little town is as perfect as she claims it to be (0% poverty and crime),  shouldn’t it get more attention and media coverage?
I digress…
Let’s talk about Walter’s last-minute transfiguration. So are we to believe that he’s a good guy because he didn’t go through with the deconstruction of his wife? 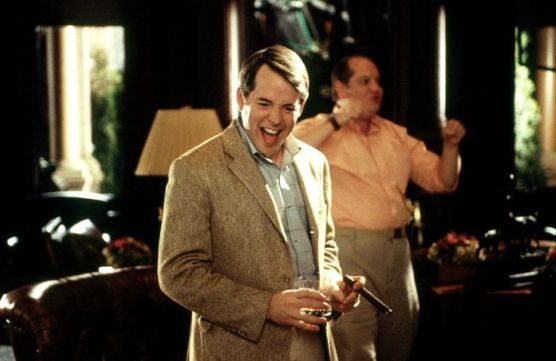 Oh PA-LEASE,  throughout the film he was bitching about how Johanna is never gonna change and he was thus,  ready to turn her into a blowup doll with cleaning features. And then he gives this speech about how she’s faster,  stronger,  and dances better. Wait, what?  So you’re distressed because your hips aren’t as truthful as that of your wife? (Our hero,  everybody). But one sentimental moment later,  he’s gotten over all these concerns and has accepted his wife for who she is. My,  what a concrete belief system you have.
But allow me to address the biggest plot hole of all. If these wives were robots (as evident by this scene among others),

how is it possible that they return to their human form with the deactivation of the chips?  Somebody didn’t think this through.
And what was with that ending?
How did these women take their husbands back?  It’s not like they left the seat up,  they tried to abolish them by suppressing and diminishing every aspect of them that is authentic and unique,  not to mention their damn will power.
The first version built up the tension before the big reveal at the end. It was satisfactory because it felt like you figured it out rather than have someone break it down for you. And it managed to build an atmosphere by keeping the men’s association under wraps for most of the movie. You never knew what they were doing unless they wanted you to. While in the 2004 flick,  they play with toy robots and wear matching jackets. (Because no suspense is built without denim). 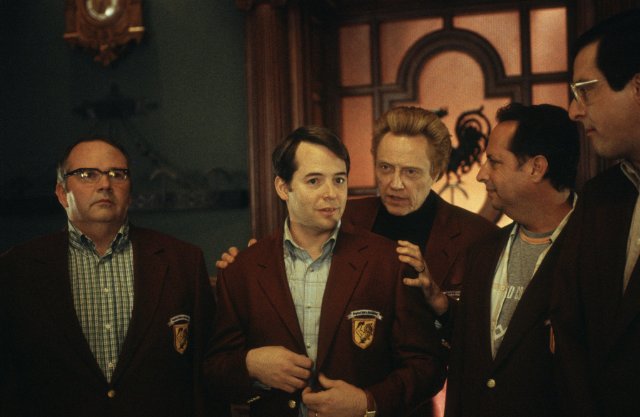 So what’s the final verdict?
Well,  this is gonna be one of those loophole-like answers because while the 1975 version was better structured,  it remained tedious and devoid of flavor. Whereas the 2004 version was lighthearted and enjoyable despite its flimsy and overcluttered design. So if you’re looking for an adaptation that does the book justice,  the 1975 version should be more to your tastes. But if you’re in the mood for more of a laidback viewing,  the 2004 version is for you.

These movies are labeled G for good grief, how did Matthew Broderick land a part in the Lion King? 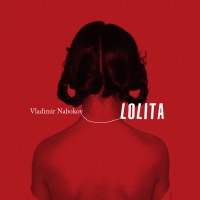 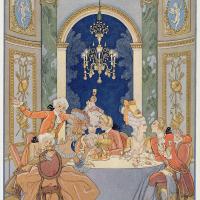